15 teams entered the Men’s competition which, on day one, featured 7 first round matches, followed by the quarter finals. All turned out to be pretty one sided affairs, with teams from La Posada, Benavista, Saydo and Mijas winning through to the semi finals.

The morning of day two saw the team of Georg Hamblin and Nigel Snaith from La Posada up against the Benavista team of Mick Jones and Mike Old. This too turned out to be a one sided match, with Georg and Nigel unable to get into their stride and having to concede defeat after 15 ends with the score standing at 4-22. 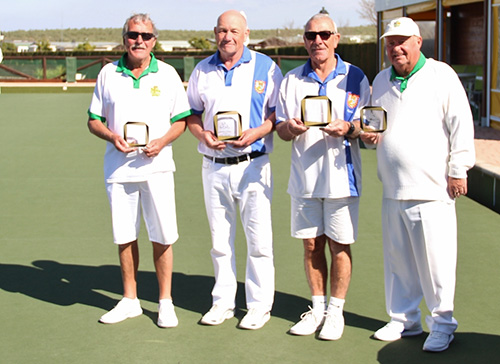 The other semi final was a much more closely fought affair, going all the way to 18 ends. It featured Bill Hill and Terry Brooker from Saydo against Steve Ward and John Wilson from Mijas. Bill and Terry held the upper hand in the early stages and had a good lead of 13-6 after 10 ends but back came the Mijas pair of Steve and John, winning 7 of the last 8 ends to run out winners by 19-15.

So, the afternoon’s final was between the Benavista pair of Mick Jones and Mike Old and the Mijas pair of Steve Ward and John Wilson and what a see-saw battle it turned out to be. Steve and John stormed into an 8-0 lead after just 3 ends and led 9-2 after 5. Mick and Mike then staged a great fight back, winning the next 8 ends to turn the match around, taking a 13-9 lead. Steve and John then proceeded to turn the match on its head once again, picking up 9 shots over the next 4 ends, to win the match 18-13 after 17 topsy-turvy ends.

Tournament Organiser, Jeff Rowe, presented the trophies at the end of the match and congratulated both pairs for putting on such a great final for the many spectators who were present to watch.

30 Ladies took part in the Ladies pairs held at Saydo BC, the weather was warm and sunny throughout the two days.
Day one saw some fine bowling and closely contested matches, which led us into a mouth-watering day two of Semi-finals. The Benavista pair, Eleanor Morgan and Wendy Pemberton played Santa Maria pair Dine Warn and Lynda Hall and it was nip and tuck until the 10th end when Eleanor and Wendy managed to take a slight lead which they held onto, booking their place in the final. 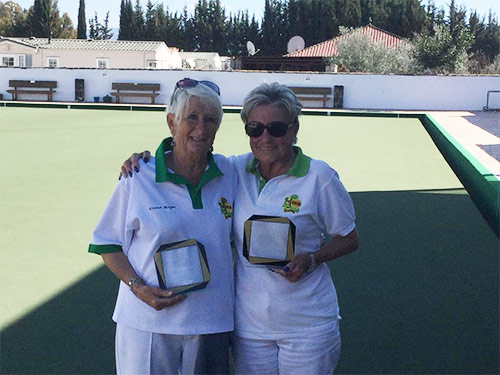 Winners - L to R: Eleanor Morgan and Wendy Pemberton
The other Semi-final was between Mijas pair Sheila Wilson and Pat Baker who played Santa Maria pair Barbara Land and Mary Dethridge, this proved to be the closest contested match with the scores at 14 each on the final end. Mary put a bowl just behind the Jack to hold shot, Sheila then bowled her last bowl to move the shot, but sadly hit the shot bowl slightly to send her bowl sideways a bit further than the shot, this booked Mary and Barbara into the final.
In the Final Mary and Barbara took a slight lead to start with however Eleanor and Wendy came back and started to take a good lead with some very accurate bowling, Mary and Barbara began to close the gap again with some very accurate bowling of their own, but ran out of ends giving Eleanor and Wendy a well deserved Two Bowls Ladies Pairs 2019 title.
A very enjoyable event Tom would like to thank all competitors, spectators and Saydo supporting crew.