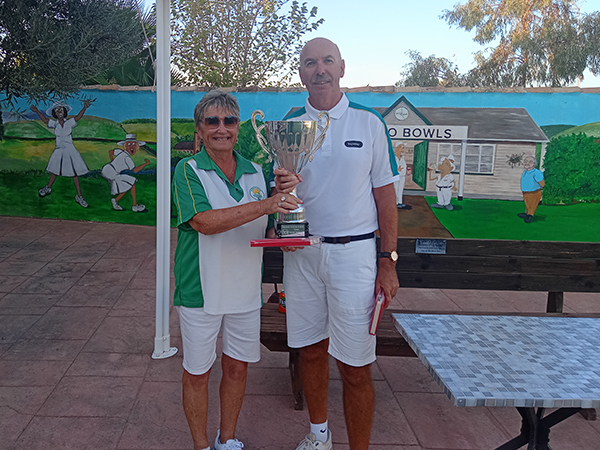 2 Bowls Pairs is a tricky discipline. Normally Pairs players have 4 bowls each.
The focus on achieving success without the safety net of those extra bowls has to be complete.
You have to be in your game from the first end. Falling behind by 3 or 4 shots is very difficult to come back from.

This year, the Malaga 2 Bowl Pairs was played as an “Open Pairs” for the first time. Normally they are played as a separate Men’s and Ladies event. This year teams could be any combination, limited only by being from the same Club and of course holding a Federation licence.
As an experiment it may prove to be a blueprint for the future of bowls competitions. The entry was the highest for any discipline in Federation competitions this year, 22 teams putting themsleves into the mix.

Held at Saydo, it attracted entries from all but 1 of the Clubs in the Malaga Province and any of the teams could put forward a claim to win the event. The first round saw some tasty match ups, with Alan Gateshill and Nina McKenzie (Saydo) knocking out last year’s Men’s Champions Juan Abeal and Manolo Suarez (Mijas)and last year’s Ladies Champions, Barbara Land and Mary Dethridge, overcame a strong challenge from Saydo’s Tom McLean and Gary Lawley. These two were destined to meet in the Semi-Final, where Barbara and Mary proved too strong and progressed to the Final.

In the opposite side of the draw, relatively unfavoured Martin Sheehy and Pat Baker (La Posada) made short work of the strong Lauro team of Ron Jones and Julian Thomas and after a thrilling extra end shoot out in the Semi-Final (14-14 after 18 ends) against Bill Hill and Bernard Percy (Saydo) marched into the Final.
Martin is in his first year as a bowler but was bowling like a seasoned champion. Pat Baker, of course, has been part of many winning teams over the years and her experience was a major part in their success so far.

In the Final, Martin and Pat got off to a very strong start, racing to a 7-0 lead in only 3 ends. In 2 Bowl pairs that is a very difficult lead to overcome. A combination of very good bowling from the La Posada Pair and uncharacteristic wayward bowling from Barbara and Mary – every time they found themselves in a good position it seemed Martin took it away from them - brought a final score of 15-5 to Martin and Pat.

A well-deserved win to Martin Sheehy and Pat Baker and commiserations to Barbara Land and Mary Dethridge who had bowled so well throughout the rest of the competition.