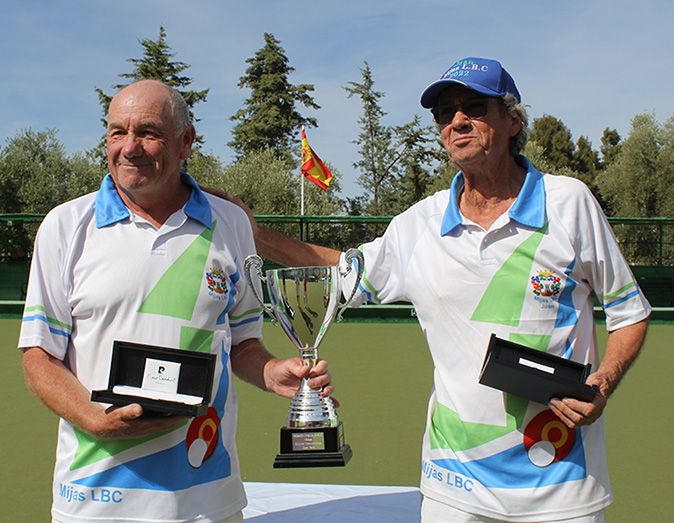 We welcome back the Malaga Province Summer Championships, the first Discipline of which took place at Lauro Golf Bowls Club between the 4th and 7th of September.
Last held in 2019 the Championships were disrupted by COVID restrictions in both 2020 and 2021, leaving a 2 year hiatus in this competition that has been running for 36 years. It was hardly surprising that within those 2 years, people got older, less physically able or found new pastimes which didn’t face the same restrictions.

During that 2 year break we also had the second shoe being dropped - Brexit restrictions on those bowlers who formerly were free to travel back and forth at will and now find they have to carefully plan their time to fit within the 90 Day Rules.
The downside of this double whammy is that the competitions are attracting fewer entries. The upside is that the restrictions on some of the more established “leading lights” has opened the way for others to shine.

The 2 years have allowed newer bowlers to become more experienced, bowling within their own Clubs. In 2019 Saydo Bowls Club, as an example was newly formed with many of their members new to the sport.  In 2022 they have become a formidable Club in their own right, strong players and a competitive ethos bringing members to every competition with a healthy expectation of success.
Once “newer” bowlers at other Clubs have also arrived on the Bowling scene with the same additional experience and expectations.

The Open Pairs is just what it says. A competition for teams of 2 people in which the make- up of the team is “Open” – i.e. can be any combination of men and women. Most of the Clubs entered teams and in the absence of the once established “stars”,the comppetitors showed just how much they bring to the sport.

Every round saw fantastic skill, close games and hard fought victories. We had upsets and surprises as favourites were knocked out and appreciation for the performances being delivered.

The Semi-Finals saw the veteran Mijas pair of  John Wilson and Juan Abeal defeat an experienced team from Benavista, Mike Old and Bill Davis, both of whom have won their fair share of trophies in the past. The surprise was the ease in which they won.
With former Andalucian Champion Juan, showing the high level of consistency for which he is known, creating a sold bedrock, the Benavista team -  who had played brilliantly in the previous round – concede the game with only 12 ends played.

The other Semi-Final was probably a bigger shock as favourites to win Paul Hughes and Kevin Westwell from the host  Lauro Golf Bowls Club lost to a superb performance by underdogs Ian Gray and Ian Patterson from Mijas Bowls Club.
The Lauro team -  possibly the best Pairs team in the Province if their recent history is to be believed (they were the last winners of this Trophy and won the Provincial Men’s Pairs Championship in each of the previous two years) found themselves in an early battle before taking a commanding lead into the middle game, then finding themselves on a losing run of ends as they went from 12-4 up to 14-17 down.

The Final then, featured 2 teams from Mijas Bowls Club, no mean feat at an away venue.
This was the first Final for the “2 Ians” but for the first 7 ends they more than held their own with the lead changing almost end by end as the 2 most consistent leads in the competition went head to head. However from being 4 - 5 down t 6 ends, their more experienced Club mates, John and Juan, changed the jack length, turned the screw and exerted the pressure. By the 12th end it was 13-7 and by the 18th and final end had amassed a comfortable 25-14 lead to win the match and the title.
Despite the score line, both teams played some exquisite shots from leads and Skips alike and the fine margins needed to win these games were there for everyone to see.
A fantastic game, all 4 players can be proud, none more so than the 2022 Malaga Summer Championships Open Pairs Winners John Wilson and Juan Abeal of Mijas Bowls Club.

As always the Trophy and individual prizes were presented by Ron Jones, the Malaga Delegado for the Federación Andaluza de Bolos, who thanked Lauro Golf Bowls Club for hosting the event, their members for their assistance in looking after the many competitors and visitors and to the Umpire for the Competition, Gordon Bulmer.