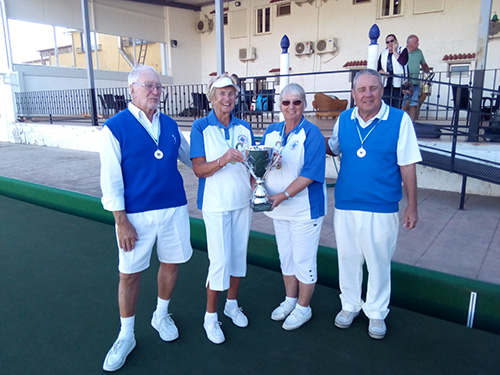 The President's Fours is a Knockout competition between teams of Four players in the Rinks format.
Players must be Federated and belong to the same Club. There is no restriction on gender within the team. Clubs can enter as many teams of 4 as they wish. Each team of 4 is a stand alone team.

Presidents 4s 2020 Report
The competition was sadly very poorly supported by coastal clubs apart from a team from Santa Maria BC. A total of 11 team’s entered, with 5 from Saydo, 5 from La Posada and the one from Santa Maria BC.
Day 1 had the Santa Maria 4 in play against a Saydo 4, the Saydo team taking a nice lead of 11-3 after 11 ends, before the visitors winning the next 4 ends to bring the score to 12-11 in Saydo favour. From there it was touch and go until the last 2 ends with Saydo holding a lead of 16-11, only to see the precise bowling of Tom Rogers take 3 on both end to give Santa Maria a slender win of 16-17.
The other 2 rinks had 4 La Posada teams drawn against each other with two very closely contested games and a good bit of friendly banter could be heard
Day 2 took us into the Qtr Finals with two 2 Saydo teams playing against each other sadly it was a bit one sided and the Terry Brooker team moved comfortably into the semi-finals, the other rinks were much more closely contested with the Santa Marie team beating a La Posada team to take them into the semis, the other 2 rinks had Saydo v La Posada on each rink with both Clubs having 1 team each go through to the semis, this gave us 2 Saydo teams 1 La Posada team and the Santa Maria team going into the Semi-Finals.

Semi-Final and Finals day
One of the Saydo teams took on the remaining La Posada team, Garth Jones, Terry Grainger, Ted Holmes and Bri Gowthorpe, the Saydo team Terry Brooker, Pat Baker, Margaret Finch and Bill Hill, were just that bit too strong for the La Posada team, winning 24-11 after 17 ends.
The other semi –final had the other Saydo team, Allen Gateshill, Gill Quigley Nina McKenzie, and Lesley Bell take on the Santa Maria team , Tom Rogers, Susan Walker, Dina and John Warn. After 8 ends they were level at 5 each, before Santa Maria started to take control but the Saydo team were always just 2 shots behind, some very accurate bowling by all bowlers however  the very precise and accurate bowling by Tom was just enough to take them to the final with a 17-15 win.

The Final
Saydo Team, Terry Brooker, Pat Baker, Margaret Finch, Bill Hill v Santa Maria team, Tom Rogers, Susan Walker, Dina and John Warn, at the7th end the Santa Maria team had a lead of 10/3 when the Saydo team won the next 2 ends to take a lead of 12/10, from there it was very much a nip and tuck, and a game of different mat lengths to try and gain control, on the 13th end Toms team picking up a 4, a lead they held onto for the remaining ends to become winners with a score of 21/16.

Winners of the Presidents 4s, 2020 the Santa Maria team of Tom Rogers, Susan Walker, Dina and John Warn congratulations to them.

The presentation was by Tom McLean, who would like to thank the umpires Jeff Rowe, Dennis Hughes, the competitors from La Posada BC and Saydo BC and a special thank you to the travelling team from Santa Maria.