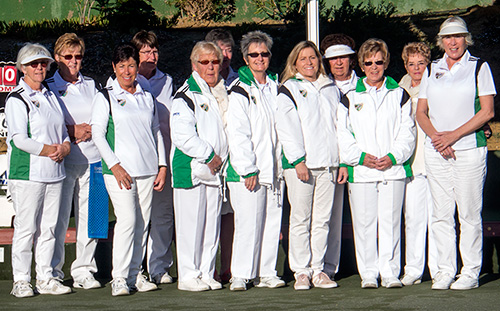 The Annual friendly Match against the Spanish National team is the longest running fixture in the Malaga calendar. Set up to provide valuable practice for the Spanish squad against, hopefully, good opposition it also provides us with the opportunity to test ourselves against the best bowlers in the country.

Always played in a friendly spirit there is still the competitive edge that comes when trying to match yourself against the best.

A new look Malaga squad approached this Match with a tremendous team spirit built over a series of practice and training sessions leading up to the weekend.
In the temporary absence of Manager Paul Hughes, David Mainwaring took over the reins while Malaga FAB Chairman Ron Jones helped with the Admin and organisation. Change seemed to be the order of the day as our usual Hotel was closed for refurbishment but the excellent Servigroup Marina Playa did us proud, with a private dining area and a place for getting together each evening. Indalo Bowls Club kindly offered practice facilites on the afternoon before the Match and the team travelled together to take a good look at the excellent facilities they provide.
On Match day Manager of the Spanish team,Graham Cathcart, spoke of the importance of the fixture to the Spanish squad and welcomed the Malaga team, wishing us good luck in the forthcoming games.
Ron Jones responded with similar sentiments before David Mainwaring and Graham drew rinks and announced the players.

For those unfamiliar with the format, the Match is played over 2 days, 2 sessions per day. It is always a separate Ladies and Men's team with each of those divided into two squads Each day each Squad plays a Pairs and a Triples, a Fours (Rinks) and a Singles. On Day one Squad A plays Squad A and on Day 2 Squad A plays Squad B. Each session therefore has 8 games in total and scoring is simply 1 point for a win and a half point for a draw. This gives a total of 8 points per session and 32 for the Match.
The first session is always a tricky one as both squads adapt to the playing surface and the cold conditions and it was perhaps unsurprising that Spain edged the session 6-2.
Each session after that, however, the Malaga team dug deep, supported and encouraged every bowl played and matched the scores of the Spanish team. After a tremendous 2 days effort from our team we ended the sessions 2-6, 4-4,4-4,4-4 to give a result of 14-18, the strongest result we have achieved against the National side.
While nowhere near a victory, the 7-9, 7-9 results of the Ladies and Men's teams showed the character this team possess and they should all be very proud of their performance and (relative) success. At the end of the Match both Teams announced they were very happy to continue the fixture and looked forward to many more to come.