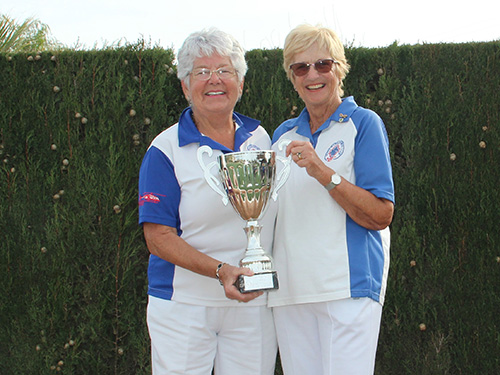 Go To Men's Two Bowls Pairs at Saydo BC

Report
This Year La Posada hosted the Federations 2 Wood Ladies Pairs. 18 teams arrived on a grey looking day for 3 rounds of matches. There was a mixed bag of results with some matches being conceded before the 18th end and some which came down to wanting 1 point on the final end.
After a busy first day we were left with the semi-finalists for day 2 which were:-
S Wilson & J Corbett from Mijas, S Jones & J Parkin from Lauro, B Gunn & E More and D Warn & L Hall both from Santa Maria.
The sun shone for us as the semi-finals started with the partnership of Sue Jones and Jenny Parkin facing Brig Gunn & Ella More. The start was a very close match and at the 8th end it was 6 all. Sue and Jenny then took the next 3 ends to make it 6 -12, but then Brig and Ella took the next 3 ends making the score 11-12 on the 14th end. Sue & Jenny then found another gear and the match finished on the 17th end with the final result being 11-20 to the pair from Lauro.
The second semi-final between Dine Warn & Linda Hall again was a great match to watch. At the 10th end it was 9-5 to Dine & Linda but Sheila and Joan wasn´t done and on the next end scored 3 to pull back to 9-8. For the next few ends it was tit for tat bowling and on the 15th end it was 14-13 to Dine & Linda. They took the next 2 ends making it 16-13 going into the last end. Sheila & Joan was fighting to the end but could only score 2 making the final score 16-15 to Dine & Linda.
The Final was between Sue Jones & Jenny Parkin and Dine Warn & Linda Hall. Sue & Jenny took the first 2 ends but then their form from earlier in the day seemed to fail them and Dine & Linda took the next 8 ends with the score at the 10th end being 12- 2.
It then looked like a fight back could be on with Sue & Jenny taking a 2 and a 3 over the next 2 ends. The fight back was short lived and with some lovely bowling from the Santa Maria pair, Sue & Jenny conceded on the 16th end with the final result being 19-7 to Dine Warn & Linda Hall.
Report by Shelley Greenwood.

A list of Previous winners can be found HERE