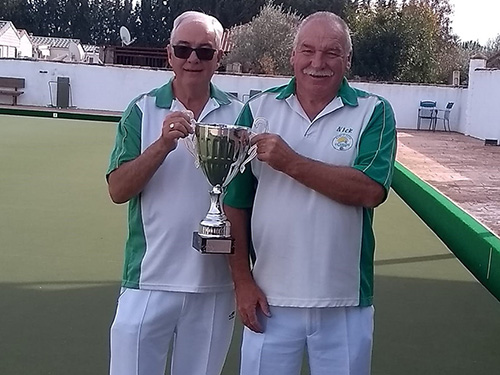 Go To Ladies Two Bowls Pairs at La Posada BC

Report
Report by Tom McLean, Photos Rob Shurmur
The Men’s Two Bowl Pairs 2020 which was held at Saydo BC had 16 pairs from across the province, the sun was out, and conditions for bowling were comfortable which everyone enjoyed.
Day one morning had eight games to take us to the afternoon Qtr Finals with some very closely contested games on all rinks, the Qtr finals gave a good mixture of teams from all the Clubs, which led us into the semi-finals with two pairs from La Posada, one from Miraflores BC and one from Lauro BC.
Day two Finals day with one semi-final on rink 4, the La Posada pair Jeff Rowe and Nick Cummins took on the Miraflores pair Tony Gatter and Tony Smith, a nip and tuck first few ends, saw Jeff and Nick move the mat distance and move a few points in front a small lead they held onto to take them into the final. A very close semi-final with some very accurate bowling from both pairs, who tried different mat lengths to try and get the better of the other pair.
On rink one the other La Posada pair Mike Ansted and Brian Gowthorpe took on the experienced pair from Lauro BC, Ron Jones and Julian Thomas. The final score did not do justice to the very high standard of play from all four bowlers - if one player put a wood on the jack the next player would move it off. This continued for most of the match with Ron and Julian winning the ends most times with just one or two shots which made their way to the final. A fantastic effort must go to both Mike and Brian.
This took us to a mouth-watering final between Jeff and Nick, v Ron and Julian, over the first 9 ends Jeff and Nick had taken a nice lead of 10-3, only to see their lead cut down to 10-7, before Jeff and Nick picked up 3. A lead of 6 points proved to be a hard task to recover from due to some very accurate bowling from all bowlers. The last few ends both pairs only picking up ones, this secured the victory for Jeff and Nick, and congratulations to them both.
Thank you to all competitors for travelling most of who stayed the night and had a lovely evening in the hotel.

A list of Previous winners can be found HERE