The President's Fours is a Knockout competition between teams of Four players in the Rinks format.
Players must be Federated and belong to the same Club. There is no restriction on gender within the team. Clubs can enter as many teams of 4 as they wish. Each team of 4 is a stand alone team. 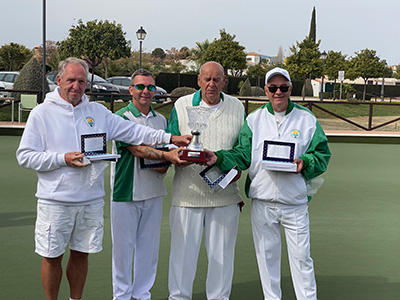 Winners - L to R: Brian Gowthorpe, Ray Fenwick, George Hamblin and Jeff Rowe
Report
With most of the entrants being from the local area the President’s 4’s got under way on the 27th March.
The first two matches of the tournament were very closely contested. The first match – between the Saydo team of Cummins, Armstrong, Lawley and Sudworth and a La Posada team of Hughes, Sheehy, Parsons and Hogarth.
The Posada team got off to a flying start, picking up a 5 on the 2nd end to lead 8-1 after 4. The bext few ends were nip and tuck and the Posada team held a 11-4 lead at 9 ends.
Unfortunately the game was brought to an abrupt stop when Penny Parsons felt ill and had to be helped from the green, where she was swiftly taken to hospital by ambulance.
La Posada Club Member Mick Ansted stepped in as an unexpected substitute.
Whether this disrupted the rhythm of the team is difficult to say but the Posada team lost the next 6 ends to go behind 12-11 on the 16th end.
Posada drew ahead with a single shot on the 17th and were 2 ahead on the last end before Saydo Skip Nick Cummins played an excellent last bowl to win the game 13-12.

In the other game, again between the two local clubs, Posada’s Arend, Pinnock, Grey and Sudworth took an early lead against Saydo’s McCarlie, Evitt (a late replacement for the COVID victim Tom McClean), Price and Mccarlie.
Both teams were bowling very well and it was 6-6 at 8 ends and 11-11 at 15 ends. However the Saydo team took a decisive 3 on the 17th and and were happy to concede a single shot on the last end to win.

The second round matches proved to be a little less competitive. With easy wins for Cummins against Mccarlie, Lauro’s Jones, Thomas, Burgin and Richardson over Snaith, Rowe, Hughes and Woodings, Santa Maria's Kaines and Lands over Gateshill, Mckenzie, South and Wake and Rowe, Hamblin, Fenwick and Gowthorp over Way, Springham, Steele and Prichett.

The first semi-finals saw a brave fight back from Jones’s team against Cummins. Having dropped a 6 on 6th end they took a 6 back on the 15th to be 19-18 behind going into the 17th. Some wayward bowling from the Lauro team allowed the Saydo quartet to take a 4 shot lead into the final end. Woth the Lauro team were holding a match winning 5, Saydo Skip Nick Cummins played a perfect draw with his last bowl to win the game 23-18
The other semi -final also held high drama with close heads throughout – except for the 9th end when Jeff Rowe’s team picked up a 5 to put themselves into the lead for the first time. The scores stayed close with the Posada team keeping their noses in front until the 15th end when the Santa Maria side picked up a 4 to go back into the lead 16 – 14.
In a head that changed with almost every bowl Posada snatched back the lead on the next end and some excellent bowls by Jeff extended the lead on the last two ends to win 19-16. Really excellent bowling by both sides in a game that could have gone either way until the very end.

The Finals was a master class, with both teams bowling very well. A snapshot of the scores show just how close it was - 0-1, 2-1,3-4, 6-7,10-12. 13-12. 13-14 after 13 ends. A 4 on the 14th end proved to be the turning point for the Posada team who held their nerve - again thanks in a large part to some excellent bowling by Jeff Rowe. The final score of 20-16 didn’t reflect the closeness of the heads and everyone agreed it was a superb Final with very worthy Winners.