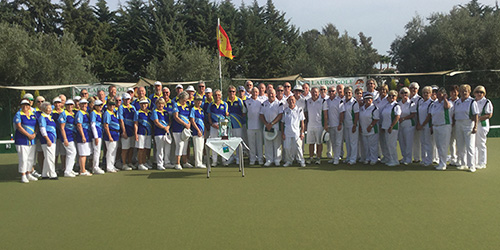 Malaga Retain Andalusian Inter-Provincial Championship 2019
Match Report
The 2nd Inter Provincial Championship Match between Malaga and Almeria was held at Lauro Golf Bowls Club on the 26th and 27th March.
The first session on the Tuesday morning resulted in comfortable victories for Malaga Men and Almeria Ladies. In the afternoon the Malaga Ladies gained revenge, with the Men’s game ending in a draw.
Overall result after Day One was Malaga 18 Almeria 14.

On the morning session on Day Two both Malaga teams recorded emphatic victories with a score of 13 points to 3. This meant that Malaga would only require 2 points from the final session to retain the trophy.
Score at Lunch: Malaga 31 Almeria 17

In the afternoon session, Marcus Smith fought back from 15-6 down to win his singles match and secure victory but after that it was all downhill for Malaga.
Credit goes to Almeria for winning all the remaining games to win the session 14 points to 2.
The final score was Malaga 33 points Almeria 31 points.

Malaga's Ladies and Gents Team Captains, Margaret and Gordon Kain were invited to receive the trophy on behalf of Malaga.

The whole competition was played in a wonderful spirit with old acquaintances renewed and new friendships established.
This is an event which everyone hopes will last for many years and dates for next years contest in Almeria area have already been agreed.

Malaga Squad For Match v Almeria 2019
Andalusian Inter-Provincial Championship
Malaga Manager, Paul Hughes announced the squad and said " I am looking forward to what should be an excellent match. We have a strong squad and after last year's close away win, I am confident we can hold on to the Trophy for another year"