III Andalusian Inter-Provincial Championships - February 2022
Introduced in 2018 when Almeria decided to create a Provincial team, the Inter-Provincial Championships was originally an annual event but after the first fixture both teams enjoyed it so much a rematch was immediately arranged and in 2020 it was to be played as a "Home and Away" fixture before COVID put a stop to both fixtures.
The plan in 2022 is to hold it as 2 separate events, Malaga in February and Almeria in October.
Malaga are current holders of the Trophy having won both previous by the tightest of margins - in both games by only 2 points (2018: 25-23, 2019: 33-31)

The Almeria Province Team Manager has asked that the format of the matches be altered this year as they have fewer available bowlers due to post-Brexit residencia issues and COVID concerns. Teams therefore will consist of only 12 men and 12 Women this year. 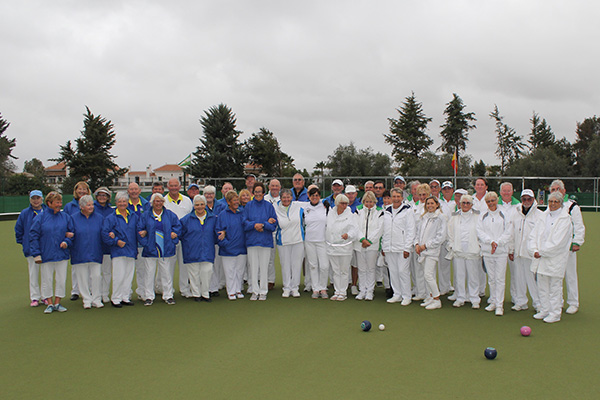 After 2 years of delay and postponement due to the on-going COVID restrictions, the 3rd Inter Provincial Championship finally took place.
Hosted by Lauro Golf Bowls Club, the Headquarters of the Malaga Delegation of the FAB, this 2 day competition is contested by the Provincial teams of Malaga and Almeria.
Each team consists of 12 men and 12 ladies and each team plays its equivalent from their rival Province in 4 sessions over the 2 day period.
The teams split in to 2 Rinks teams (4 players) and a Singles match followed by a Triples and a Pairs match each day.

On the first day the Almeria team took a shock lead at the end of the first session as traditionally the host side is considered to have the advantage of knowing how the home green plays but Almeria came out all guns blazing to take a lead into the lunch break - the Almeria Men taking one of the Singles matches and a win and a draw from the Men’s 4’s, while the women won a Singles and a Ladies’ 4’s.
End of session 1: Malaga 7 – 9 Almeria

The more familiar Triples and Pairs formats saw Malaga turn that around in the afternoon session, with the Malaga Ladies doing most of the damage, losing only one of their 4 matches (in the Triples) while the Men did a little better than the morning winning 2 matches (a Triples and a Pairs) to lead 17-15 at the end of the first day.
End of session 2: Malaga 17 – 15 Almeria

After weeks of glorious sunshine, the weather gods chose to frown upon the Competition weekend as the first day was cold, wet and miserably Winter weather – and the second day saw little improvement, adding blustery wind to the discomfort of the participants.

The morning of day 2 – played throughout in a light, annoying, drizzle and strong, gusting winds saw the strength of the Almeria men again dominating, winning three of their 4 matches (2 pairs and a Triples) while the Malaga ladies teams redressed the balance with the same results in their favour.
Going into the last session, then, it was anyone’s trophy with, Malaga holding a slender 2 point advantage from the previous day. In addition, the afternoon was to be Singles and 4’s – disciplines Almeria had dominated in the first day.
End of session 3: Malaga 25 – 23 Almeria

The first result of session 4 was an Almeria victory in one of the Ladies Singles and the Match was now all square.

Then came a victory to Almeria in one of the Men’s Singles. Looking along the scoreboards the other Men’s Singles was all level, the other Ladies singles was showing a lead for Malaga, both Ladies 4’s were losing but both Men’s 4’s were winning. It really was going to go all the way to the wire.

Both the remaining Singles matches went the way of Malaga and the Malaga support was suddenly breathing a little easier. They only needed to win one of the remaining 4’s matches to retain the Trophy and one of the men’s 4’s had a comfortable 20-10 lead with 3 ends to play.

Malaga managed to see out victories in both Men’s 4’s and one of the Ladies 4’s to finish with a surprisingly comfortable 6 point lead.
Final Score Malaga 35– 29 Almeria
For those interested in such things, the Ladies won 10 of their 16 matches (20 points) and the Men won 7 and drew 1 (15 points)

Malaga Delegado, Ron Jones, thanked Lauro Golf Bowls Club for their hospitality and friendliness of all their members who had worked so hard to make the event a success, the Umpires and Markers for their dedication and especially the bowlers from Almeria who had made the long journey.
Their skill and application were much admired and the friendly spirit of the matches ensured that this competition will continue for many years to come as we all look forward to renewing the rivalry in the next Championship, to be held in Almeria in October.

Before presenting the trophy to Malaga Team Manager David Mainwaring, he took the opportunity to thank outgoing Almeria Manager Graham Marlow for all his hard work in helping to set up these Championships and for the enthusiasm he has always brought to the sport.
His colleagues from Almeria presented him with a memento of his time as Team Manager.
In response he said he was content that he left the sport in good hands and he looked forward to watching the direction it took in the coming years.

Receiving the trophy David Mainwaring dedicated it to all of the players whose efforts had contributed to the victory.

Malaga Manager, David Mainwaring announced the squad and said "I am very confident that with the squad we have we can again be victorious over Almeria""