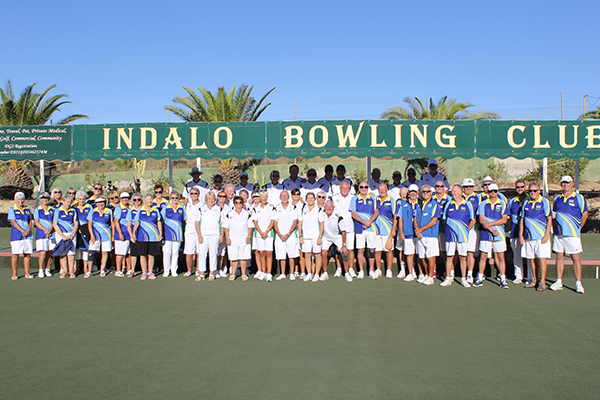 Following the home win in February (35-29) Malaga travelled to Almeria full of confidence. However, it is never an easy Match especially away from home and Team Manager Bill Davies was wary of an Almeria team looking for a revenge victory.

On the first Session of Day 1, the scores were even. Two tough games both went into the final end with the scores level. Nina, Jenny, Jan and Belle had led for most of the game but never enough to put daylight between them, with the score 9-9 at 10 ends and 16-16 at the 17th end. Almeria managed to swing the point in their direction on the laast end to take the 2 points. meanwhile Jeff Rowe, Mike, Jack and Nick were kicking themselves after letting a 14-7 lead slip through their fingers, winning all of the first 8 ends but only 2 of the final 10. At 14-14 on the 17th end the momentum was with the Almeria team and they duly picked up the 2 points.
End of session 1: Malaga 8 – 8 Almeria

The morning of day 2 – saw all of the Men's teams taking comfortable victories, however with only one of the ladies teams winning it left the result still in the balance.
End of session 3: Malaga 26 – 22 Almeria

The first 2 results of session 4 were Almeria victories in the Ladies Singles and the Match was now all square.
Both Men's Singles were Malaga wins, restoring our 4 points cushion.
The 4's games were all at 12 ends when the Singles finished. Both ladies 4's and 1 of the Men's 4's were all losing and a drawn Match, - and a one end playoff - looked on the cards. The Men's team that was winning was ahead by 20 shots and unlikely to lose but the only one of the other games that gave hope was the other men's 4's which was only down by 1 shot. All eyes and hopes were on that one game.
Jeff Rowe, Jeff Turner, Jack Gordon and Nick Cummins responded to the attention - and the pressure - picking up 2 to go ahead and a single to extend their lead to 12-10.
It all became a lot more comfortable on the next end when Jeff R played a lovely shot to take out an Almeria bowl and pick up a SEVEN. At 19-10 the last 3 ends were about "game management" and restricting their frustrated opponents to single shots to win 19-13 and clinch the Trophy.
While the Session ended 8-8, the extra win in the Morning session secured the win.

For those interested in such things, the Ladies won 4 of their 16 matches (8 points) and the Men won 13 matches (26 points)
This was a complete reversal of the previous Match in February, when the Ladies picked up most of the points, and shows it really is a Team game.

Malaga Delegado, Ron Jones, thanked Indalo Bowls Club for their hospitality and friendliness of all their members who had worked so hard to make the event a success, the Umpires and Markers for their dedication and especially the bowlers from Almeria.
Their skill and application were much admired and the friendly spirit of the matches ensured that this competition will continue for many years to come as we all look forward to renewing the rivalry in the next Championship, to be held in Malaga in February.

Before presenting the trophy to Malaga Team Manager Bill Davies, Almeria Delegada Ruth Compton re-iterated her thanks to Indalo and congratulated the Malaga team on its success. She, too, looked forward to the next match and hoped to finally bring the trophy to Almeria.

Receiving the trophy Bill Davies dedicated it to all of the players whose efforts had contributed to the victory.

Malaga Manager, Bill Davies announced the squad and said "I am very confident that with the squad we have we can again be victorious over Almeria""